Medical terms often sound like a new language because these technical terms are actually conjugate words combined for concise descriptions. Medical terms describe body parts, common ailments, procedures and treatments and can be tongue twisters for the uninitiated. However, to those who know the secrets of decoding, these terms are compact bits of information with consistent meaning.

The foundation of a medical term is the root, which is often sourced from Greek or Latin. Prefixes are added to the beginning of the root word to denote number, color, direction, degree or position.

Suffixes are added to the end of root words to denote condition or description. Some medical terms may include more than one root word. Applying different prefixes and suffixes to the same root creates related terms. That is, the medical term for a disorder can be modified by changing the suffix so that the resulting word refers to a treatment for the condition.

Given this construct, it is understandable that medical terms can be difficult to pronounce, much less remember, especially for the layman. 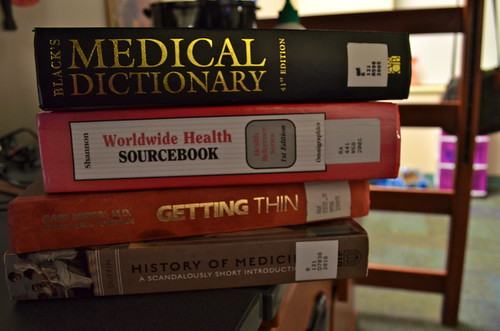 This is that ubiquitous device used to measure blood pressure. It consists of a gauge attached to a cuff, which is inflated to constrict the arteries. A stethoscope is used with older-model sphygmomanometers to determine systole and diastole phases, but the newer electronic models are all-in-one units that can inflate the cuff, perform pressure readings and store the information for easy retrieval.

The root of sphygmomanometer is "sphugmos," Greek for pulsation, while manometer refers to any device used to measure tension or pressure.

This is the correct medical term for a condition where the eyelids and the mucus membranes called conjunctiva are inflamed due to an infection. It is a highly contagious condition that is commonly referred to as pinkeye.

Nucleolus is the spherical part of the nucleus of cells that is needed for the manufacture of proteins. It contains DNA, RNA and proteins. The root is "nucle" for the Latin word for small kernel, and the suffix "ole" denotes a diminutive form of the root.

A hypochondriac is a person afflicted with abnormal preoccupation with personal health conditions. The root is the Latin word "hypochondriacus", referring to the upper abdominal region from which the condition of melancholia and depression can be traced according to outdated medical theory.

These are the round, clustering bacteria that are known agents for different diseases including endocarditis, skin and intestinal infections. The root is from the Greek words "staphyle", meaning bunches of grapes, and "kokkos", meaning seeds or berries.

This is a surgical procedure to repair hernia using sutures. The root is Middle English and Latin, most likely the word "hira" meaning rupture and the suffix rrhaphy from the Greek word "rhaptein," which means to sew.

This is the most common type of arteriosclerosis, which refers to plaque formation resulting in narrowing of the arteries. The root refers to the Greek words "ather" for gruel and sclerosis, which means hardening.

This is the technical term for red blood cells. The root is from the Greek word "erythros" meaning reddish and the Latin "cyta," which means hollow vessel.

Plastic surgery to repair cardiac valves is called valvuloplasty. The root is valvulae from the Latin word "valv" and the suffix plasty from the Greek word "plastia," which means to repair.

Knowing the meanings behind the components of the medical terms will make it easier to pronounce and remember the terms.